Origins and derivatives of Octavien Dalvimart's collection of Turkish costume

A Spahi.
A Sailor.
Bostancji Bachi

A few illustrations have a more than coincidental similarity to illustrations of Ottomans circa 1790 from 'Costumes Turcs', an album previously owned by Heinrich Friedrich von Diez

There may be more but most of the items from the Diez album do not have images available from the British Museum.

Figures like these were mass produced in Ottoman workshops for sale to tourists, and the number of images desired were ususally pasted in an album with captions. They were probably copied from a master set but the artists seem to have been allowed a measure of freedom with details and colours. This can be shown by the duplicates in the Ralamb Costume Book, 1657:

There are other pairs with similar costume but with differences in the pose.


Illustrations of Ottomans, engraved by F.H. Clark, in McLean's The Military Costume of Turkey, 1813, are usually attributed to Octavien d'Alvimart (Written by William Miller, from whom, through John Murray, Thomas McLean purchased the rights.)
They include some figures in the same costume as in Miller's The Costume of Turkey in new poses with a background added:
Capidgi Bachi.
Ladle Bearer.
Spahi.

Octavien d'Alvimart is not mentioned in this book, instead it says "The subjects which compose this selection, have been furnished by the liberality of a gentleman, who had stored his portfolio during his residence at Constantinople."
Could this be a clue that d'Alvimart did not paint these, but instead collected them?

Many of the Ottomans in the Augsburger Bilder, 1802-1810 are based on the same sources provided by d'Alvimart for McLean's The Military Costume Of Turkey:
. Ottoman Turkish Infantry
. Arab Mamalukes and Asiatic Light Infantry
. European Turkish Cavalry
. Asiatic Turkish Cavalry


Turkish Infantry after Wilhelm von Kobell, Vienna, c.1809-13 includes many figures based on Miller's Costume of Turkey. Some of the vignettes are similar to the Augsburger Bilder including the Artillery in the Augsburger Bilder. Formations of uniform troops based on a single figure from Miller's Costume of Turkey are not evidence of troops wearing a uniform.

Turkish Cavalry after Wilhelm von Kobell, Vienna, c.1809-13 includes many figures based on McLean's The Military Costume Of Turkey and Miller's Costume of Turkey and one, on the far right, is based on a Spahi after Vanmour from 100 years before.


There are other books etc. that have images based on these but I'll skip forward to the 20th century - 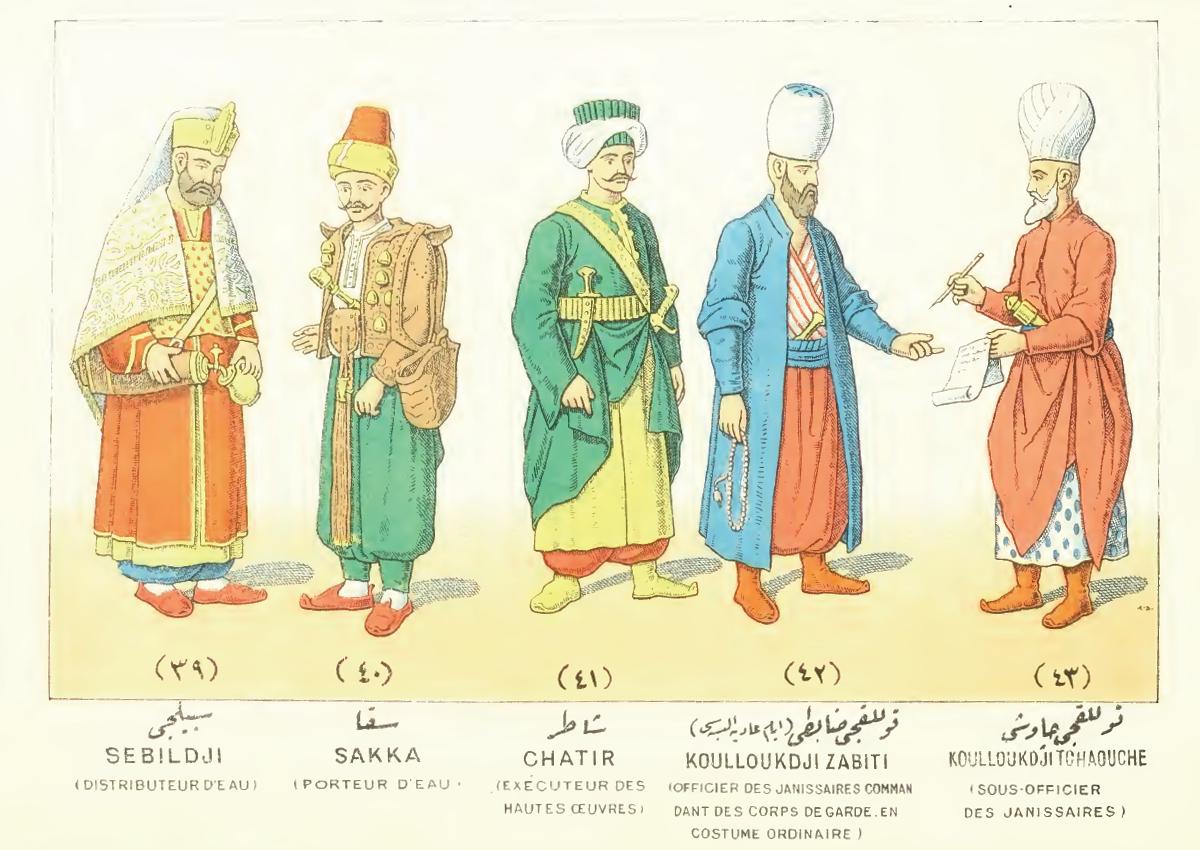 This one includes 2 figures on the right in the same pairing as in Illustrations de Histoire des Othomans: Officier inférieur des Janissaires dans son costume ordinaire, Sergent major des Janissaires. The coloured material at the front of the turban of the right-hand figure has been eliminated, perhaps because a Koulloukdji Tchaouche did not have this.
Where these figures have a more specific caption than in Miller's Costume of Turkey these are educated guesswork.

Mahmoud Chevket Pacha 1907 is probably the source for Osmanli Ordu Teskilati and was used by Dr Chris Flaherty. By this time they are many steps away from the originals. All these should be considered to be depicting costume of the 1790s, or if from an Ottoman album  from the last time the master set was updated before this.


Ottoman Illustrations of Costume and Soldiers