Portrait of a Mughal officer, mid to late 17th century
from the Small Clive Album 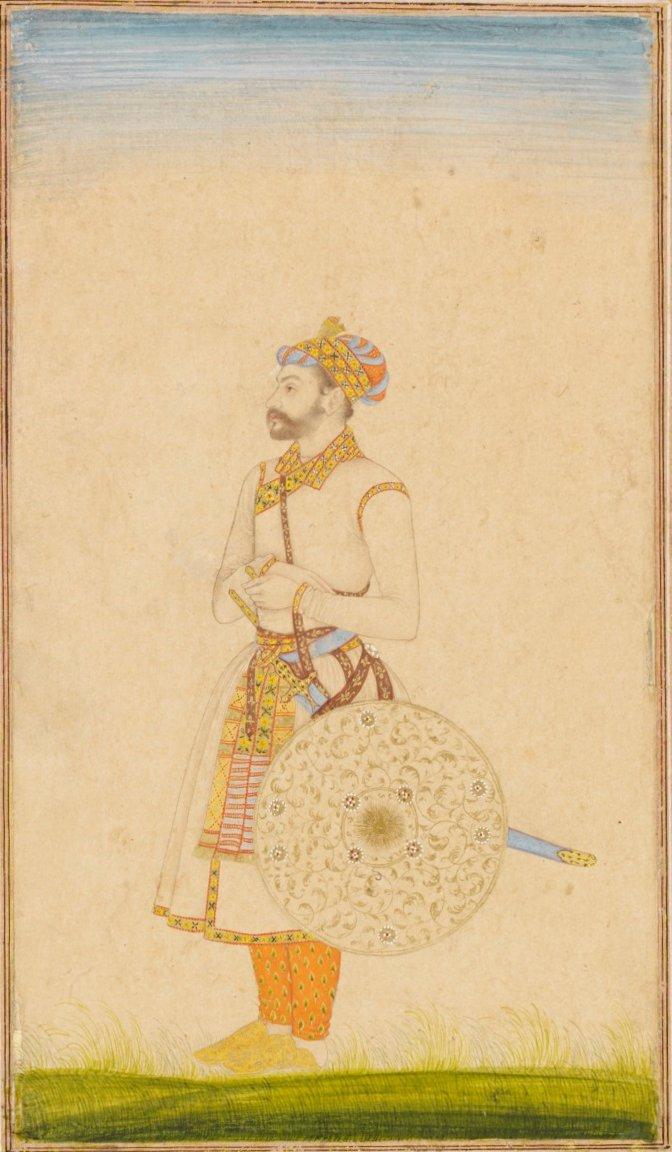 This miniature painting is part of the Small Clive Album of Indian miniatures which is thought to have been given by Shuja ud-Daula, the Nawab of Avadh, to Lord Clive during his last visit to India in 1765-67.

The officer stands in profile facing left with his hands resting one above the other across his chest. He is seen standing on top of the intersection between two grassy shallow mounds which are detailed with slender stalks of curving grass. The figure stands against the plain ground of the buff-coloured paper which is streaked at the top with thin brush strokes of blue rising up to a more solid area of notional sky painted in an opaque medium.

The figure of the officer is partly painted in nim qalam with only the decorative details of his dress and armour picked out in colour. He has a close-cropped beard with a luxuriant moustache above. He wears a jama with a decorated collar and edging round the hem and front opening and shoulder seams in red and green motifs against a gold ground. These details are echoed in the outer encircling bands of his turban which is painted below in alternate stripes of red and blue spotted in gold. He wears a double patka: the outer one in patterned bands of yellow, red and gold, and the inner one with a floral pattern of yellow and red flowers on a gold ground above horizontally striped bands of blue and gold spots bordered in red. Below his jama he is wearing a pair of bright orange paijama decorated with a half-drop design of gold-outlined green leaves. Below these he is shod in a pair of yellow shoes with gold patterning.

Round his waist he has a gold-patterned blue sword belt off which hangs a gold-dotted blue curving scabbard with a gold talwar hilt richly ornamented with multi-coloured motifs, repeated on the tip of the scabbard. He carries a round shield with golden scrolling ornamentation and jewelled bosses. This is hung on a deep maroon-coloured hanger, belt and shoulder strap which is picked out with gold decoration. The two points of a katar dagger are seen sticking out from the right side of his body in front of his right arm.


Back to Indian Illustrations of 17th Century Mughals, Rajputs and Marathas