Give the Gift of Amazon Prime 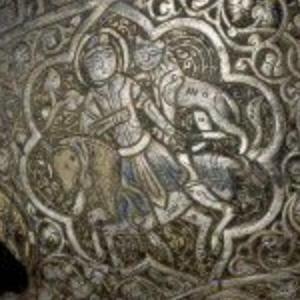 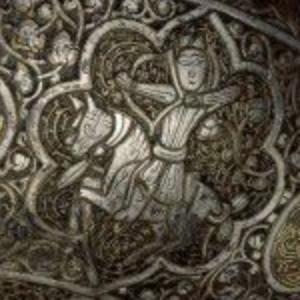 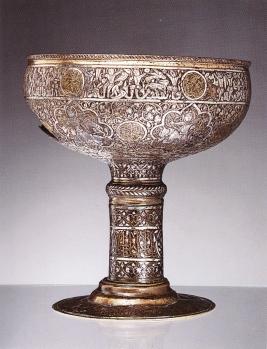 A large image of a different side of the Fano Cup

The exterior decoration of this hemispherical cup on a high pedestal is organised in superposed registers. The central band, with a plant background, contains six multifoil medallions with figured motifs. It features, successively, an infantryman, a cavalryman-falconer, a cavalryman alone, a cavalryman with antelope, a cavalryman using a bow and a cavalryman accompanied by a lion. These figures are interspersed with small circular medallions inlaid with gold filled with very small overlapping rosettes. The same golden medallions punctuate the thin lower band, which is adorned with a frieze of animals passant. The upper band, also punctuated with small golden circular medallions, is decorated with infantrymen armed with swords and bucklers. These figures and the animals make up an animated epigraph in which the legs of the infantrymen form the ascenders of the letters of an inscription that has been partially deciphered. The animated epigraph of the upper band is a decoration attested on only ten or so Islamic metal objects. The Bobrinsky bucket[1] was the earliest one on which it appeared, accompanied by writing with human heads. Native to Iran, animated epigraphy appears on a few Ayyubid objects[2]. The latest example of this decoration is on a Mamluk candle ring[3].

The hammered foot is attached to the base of the cup by a ring in light relief, which is decorated with fine plant-like scrolls. Its decoration is divided into three registers. The middle register comprises an inscription with high ascenders interrupted by two medallions decorated with lotus flowers. It is framed by two fine bands with small multifoil medallions on a background of fine foliage.

The inside of the cup is decorated with a multifoil medallion with fine leafy rinceaux punctuated with a star motif.

The decorative technique used is also Iranian in origin. It was from the eastern regions of the Islamic world that the technique of inlaying metal objects with metal seemed to come, even though there are examples of inlaid metal objects from the Near East and the Roman world[4]. The earliest Islamic inlaid metal objects are from Khorāsān, where the new process appeared in the twelfth century. The technique, which makes use of various metals such as silver, copper[5] and sometimes gold, spread rapidly to the Near East and enabled the blooming of Ayyubid metalwork, through the works of the artists of Mosul (Iraq) and various Syrian, then Mamluk centres.

The shape of the object should be considered without the foot that – as can be seen from the decoration – was added later. Its profile is quite similar to a series of cups produced in Khorāsān (Iran) in the thirteenth century, often equipped with a cover with a knob[6].

The hunt is the main decorative theme. A princely entertainment par excellence, the hunt was a popular theme in the Islamic arts from the Umayyad period[7], inherited from pre-Islamic periods and Sassanid Iran[8] in particular. The animal course of the lower register is also part of the hunting theme. Its strong decorative potential meant that it appeared on many Islamic objets dart from various periods and regions[9].

The foot, with its thuluth epigraph, is characteristic of Mamluk decoration. The lotus flower reflects the influence of Far Eastern motifs, introduced through the medium of Ilkhanid art, which flourished in Iran from the thirteenth century and came into contact with Near Eastern art after the Pax Mongolica signed in 1326 by this Mongol dynasty (whose genealogy is linked to the Yuan dynasty of China) and the Mamluks. 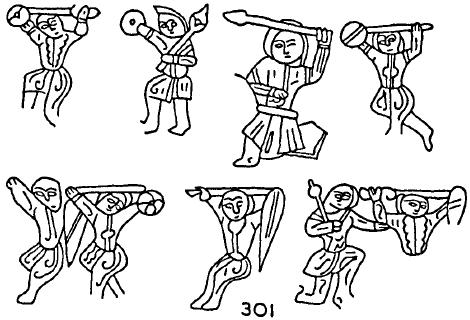